Early this year Bush had been in the studio working on new music. Another album is just around the corner. Yesterday Gavin Rossdale tweeted this teaser:

“Loving my London
How is everyone ?

Just been going through options for the cover

Sooo on our way to you x”

The new album may be closer than we think. This makes me wonder.. what new songs are in store? Will they be resurrecting and of the unused songs from The Sea of Memories? These tracks didn’t make the album, maybe this time around:

What about the two newer songs they band performed at some of their live shows last year? Will those make they cut

Loneliness is a Killer
This House is on Fire

About the mag:
“The magazine is shot entirely by photography duo Herring & Herring and is dedicated to celebrities who stand out as creative leaders in their respective fields. It focuses on notable entertainers presenting them in a way they have never been seen before through a combination of portraits and fashion editorials.” – (via HerringandHerring.com)

Their next issue entitle ‘Framed’ hits the stands in September and will have 7 different covers. One of those featuring our very own rock god Gavin Rossdale. Additional artist featured include Elijah Wood, Fred Armisen, Kelly Osbourne, Lars Ulrich and Gina Gershon.

Tomorrow August 1st begins pre-order for Herring & Herring Magazine. When you pre-order you will have a chance eligible to win a 24×36 autographed print of the artist of your choice, and be the first to receive the magazine before it hits newsstands in September.

This upcoming Wednesday @ 1:30pm PST (Pacific Time) go on Twitter to chat with Gavin Rossdale! @TwitterMusic is hosting an open forum to talk to Gavin Rossdale. So get your questions ready to #AskGavin 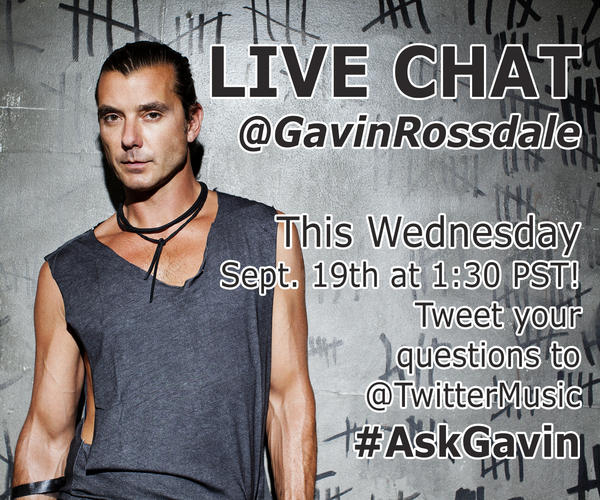 Taylor Momsen: What is your favorite band?

Gavin Rossdale: I feel boring saying this – The Pixies.

Gavin’s Question For The Bowl: If God is omnipotent, can he make himself a breakfast that’s too big to eat?

Tune into Big Morning Buzz Live every weekday at 10AM EST on VH1.

Mike Jones with DC101 interviewed Gavin Rossdale on Friday. If you missed the show listen to it now online!

‘The Sound of Winter’ Snowboard Trip

This is a nationwide contest, but you can only enter if your local radio station is hosting this contest. Below is a list of phone number (cause each station is assigned a different number) and participating stations. I’m trying to track down as many as possible. This is an iHeartRadio sponsored event, so Radio stations affiliated with them will most likely host this contest.

The Sound of Winter with Bush Contest

Nothing says ROCK like having your own custom, one of a kind snowboard made from a rock star’s guitar.

You and three friends will fly to Los Angeles and meet Bush at Signal Snowboard Factory. You’ll pick up your new snowboard designed by Gavin Rossdale and made from his guitar, and your friends will get new boards too! Then Bush will play a private acoustic set for you at the snowboard factory.

Afterwards, you and your guests head to Big Bear for the weekend and put the snowboards to use. We’ll even give you and your entourage $10,000 to buy some cool new snowboarding apparel! You and your friends will also receive iPads loaded with the new iHeartRadio app and Bush’s entire music catalogue including their new single “Baby Come Home”.

Listen weekdays for the cue to call, when you hear it, be the 20th nationwide caller for an instant $1000 and a shot at that sick trip with Bush.

Indianapolis, IN: X103:
Listen weekdays for the cue to call

Sarasota, FL: 105.9 The Buzz:
Listen weekdays for the cue to call

Tallahassee, FL: X101.5:
Listen weekdays for the cue to call

A number of radio stations are hosting this contest which runs from 1/16-2/24. Q1 Ultimate Cash Contest Winner’s Bonus Prize Giveaways. It’s nationwide. So the 20th caller wins $1000. It happens weekdays from 7am-8pm (times vary per area). You do NOT win the Bush prize just yet (only $1000).

During the 6 week period all of the people that win the $1000 have their name go into a ‘Bonus Drawing’. On Feb 27th, a winner will be chosen from that group. That prize will be the Bush ‘The Sound of Winter’ Snowboard prize.

Here’s the tricky part… This contest is being promoted 10 different ways. What do I mean? Not every station in the US plays Bush, so there are 9 other prize options being given away.

Eg. ‘My Weekend with Sir Paul’, ‘Live Like Rihanna for a Weekend’, ‘The Ultimate Napa Valley Experience with Train’, etc.

Other stations will be promoting these contests, but all the $1000 winner’s names will go into the same ‘winning pool’. So you may want Bush while some other dude wants to live it up with Paul McCartney. This is where the rules are fuzzy. I’m not sure if 1 winner total is being chosen OR 1 winner for each bonus prize. They are basing your entry on which phone number you used to call in and/or call time, so that is the prize you are eligible for (that part is fuzzy too).

Here’s your chance to help make the holidays brighter for some children in the Bay area. It’s the The Day Of 10,000 Toys!, RIGHT NOW at Wal-Mart, 8001 US Highway 19N in Pinellas Park.

The whole 97X crew will be broadcasting live from 5:30am until midnight and we’ll be collecting new, unwrapped toys for the Marine’s Toys For Tots.

Auction Items
We’ll be auctioning the following items at specific times throughout the toydrive. Call the 97X studios during to specified time to bid. You can also bid live at the toy drive during the bidding period.

Listen to this 4 part interview with Gavin Rossdale on Radio Sophie.

Our Holiday of Miracles show to benefit Rady Children’s Hospital is this Sunday at House of Blues. The show, which sold out in minutes, features Bush (Gavin Rossdale) and Lenny Kravitz! Gavin called us today to talk about the new album, Christmas shopping for Gwen and how much he loves playing San Diego.

Please wait a few seconds for the audio to load. Mr. Rossdale thanks you!

See archive of Bush articles on the web or transcribed from other sources. Magazine articles that have been scanned in are now in the Gallery.